Never Can Say Goodbye – The Original 7″ Mix – is now available for streaming on Spotify and Apple Music. Recorded at Mad Hat Studios in February 2001, the track remained unreleased and sitting in the archives until a recent rediscovery. Now newly remastered, Never Can Say Goodbye is the first of two previously unreleased mixes scheduled for release this year, in anticipation of Sundray’s brand new recordings due in 2017. 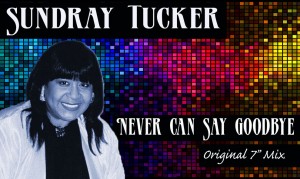