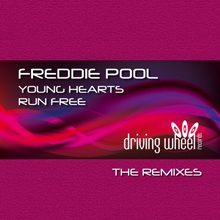 Freddie Pool’s debut single is in production and is due for release Autumn 2014. This is Freddie’s first ever solo record. She was apparently offered a deal by Motown founder Berry Gordy and recorded a song called “Cryin'” which is in the vaults. Freddie was unwilling to leave her group at the time (Delicates). The single will be released on all digital platforms in the UK and Europe.

Promote Your Page Too

Driving Wheel Records is
a member of the BPI